Global uncertainty rises and assumptions are challenged, according to the U.S. social mood "weather forecast" for August 2015.  A serious or deadly event on the California coast is also indicated.

Update:
The climax event we were watching for was on 7/16, the shooting in Chattanooga, TN in which 5 servicemen died as well as the gunman.  Chattanooga is within the high risk area highlighted by our map, but the event took place a few days outside of our time window.

Backlash to the many recent changes in U.S. culture should start to be seen in the week ahead.  U.S. social mood "weather forecast" shows Americans less "nice" and more "rowdy."

U.S. social mood "weather forecast" shows Americans feeling nervous about events in the world and within the U.S.  A BIG week for U.S. people.

U.S. social mood "weather forecast" shows a new wave of protests and manic mood coming to America in the week ahead.

Update 6/17/15: As noted in the video for increased risk of violence on 16th and 17th, and by location highlighting several East Coast states including S. Carolina , 9 dead in S. Carolina shooting at church Bible study class.

June is a turning point for the United States internally and internationally. The chart below is the overall flow of social mood as projected for June 2015.

Note to our followers: The addition of geographic analysis to our toolkit allows us greater precision than ever before in next-month future forecasting.  Follow along with the news-flo this month and see how well we did translating social mood data into future headlines.

Week 1 (through June 6): Mild and ongoing economic concerns are present, but a major U.S. economic event is unlikely.  Most of the stimulus for economic issues likely come from outside the U.S. (Greece?).

Week 2 (through June 13): There may be residual economic concerns from any events of the first week of June, but they should dissipate during this period. Any stimulus for new economic concerns should primarily come from outside the U.S. Watch for a significant development in U.S. – China relations near June 11. Week 3 (through June 20): There is a moderate risk of civil unrest or disruptive event(s) during this period (see map below).  The region at highest risk is the Eastern States, but there is an elevated risk throughout the country.  Manic mood may also show up financially as rising indicators of inflation.
(click map to enlarge) 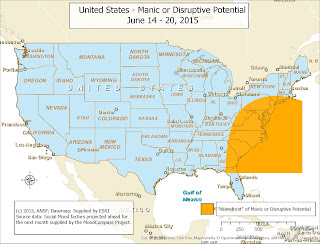 Week 4 (through June 27): The outlook of Americans should begin to take a more serious tone this week.  The region North of Texas has the highest projection of this mood factor during this period (see map below, left).  However, this central location may also be indicative of a national shift. A new wave of economic concerns and domestic issues are starting to take hold in the U.S. There is a moderate risk of civil unrest or disruptive event during this period, possibly expanding or continuing from last week (see map below, right).  The region at highest risk is near Michigan and Ohio, but an elevated risk remains throughout the country.  Manic mood may also show up financially as rising indicators of inflation.

Week 5 (through July 4): The outlook of Americans should become much more serious in tone this week, expanding from last week (see map below, left).  The "heartland" of America has the highest projection of this mood factor during this period. Economic concerns and domestic issues are growing and are likely a strong focus of politicians in Washington D.C. and traders on Wall Street as this mood factor is elevated in both D.C. and New York City (see map below, right).  These issues are not necessarily limited to those areas. 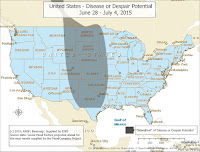 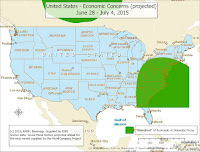 Violent explosion! I read those words a few days ago in conjunction with the unexpected eruption of a volcano in Chile. It made me wonder what was about to happen next. Unlike many, I do not believe this is an isolated incident, nor is it “random.” It is part of an overall pattern in play right now (MoodCompass Type: SSE). This is Nature’s expression of it for the moment. This same pattern in the human world can look like sudden geopolitical escalation, violent protests, or even terrorist activity. In the markets it often goes with sudden spikes in the price of oil and gasoline. There was a violent explosion with an unexpected twist in the news today -- two hostages were inadvertently killed in a drone strike, albeit last January.

Expect the unexpected in world news over the next week or two. Expect surprising explosive events or violence with an unexpected twist. Personally, I recommend you do what you can to keep your world calm and centered. Things will likely get worked out one way or another on the global scene so that “business as usual” may prevail. There is quite an investment in the status quo, and for now, keeping it in tact is strong motivation for world leaders. So, whatever volcanoes, skirmishes, or other unexpected explosions appear over the next week or two, do your best to stay cool!

Recap: the MoodCompass team reported a disaster indicator peaking August 1-8 that would impact the United States, but be more destructive outside the U.S. (see last few posts). It continues to play out.

Tropical storm Iselle will hopefully turn out to pack less of a punch to Hawaii than feared.  However, the MoodCompass disaster indicator says there is an even higher likelihood globally for natural disasters or major global changes tomorrow (8 Aug) than there were today.  The approximately 1 week period of an anticipated cluster of disasters began to show on 2 August with toxic water in Ohio, a potentially deadly inconvenience.  The following day, a major earthquake in China toppled thousands of homes and killed 600 people.  Today, 7 Aug, a rare hurricane landfall in Hawaii may cause some damages, but hopefully they will be minimal.  Tomorrow and into early next week, this global disaster wave should continue to play itself out.  Best case, it will soon run out of steam and fade away.  All that is clear today, is that it isn't over yet.

As mentioned in previous posts, a global cluster of disaster-type events has begun, and it may be another week before this disaster wave peaks (current data shows it is not even near peak yet).  While the most destructive events should be located outside the United States, the U.S. will not be immune.

Saturday kicked it off with Ohio's forth largest city suddenly finding itself waterless due to toxins found in the drinking water. This has resulted in the governor declaring a state of emergency.  See news story.

On Sunday, over 12,000 homes were destroyed in China due to a large earthquake.  The current death toll is near 400.  See story.

There should be another week or possibly more filled with headlines of death, destruction, disease, and/or toxicity.  This is the measureable shift in consciousness we have already made in collectively turning away from a focus on global violence, aggression, and expansion.  It just hasn't yet all shown up in the news.  Give it a week or two.  We will have a new global focus, new types of collective troubles to worry about.  Perhaps it doesn't have to be this way, but for now, this is what gets our collective attention, and allows us to globally shift gears.

A U.S. disaster signal has been detected by the MoodCompass Project team after many months of little to no U.S. disaster activity.  It should be of significant emotional impact to most people within the U.S., and will most likely include loss of life greater than seen in average news stories; economic losses are also likely.

We will wait a few more days before presenting further information about the likely type of disaster while we sift through our data, and get additional information.

A disaster signal is generated when the relationship between U.S. social focus (social mood measured by top Google Hot Trends) and social mood factors found in the top U.S. news stories meets certain criteria.  You can see in the chart below, that the U.S. disaster mood factor today spiked up from the low range area it normally hovers in.  This means that there is a significant risk of a U.S. disaster in the near future, most likely between 7 and 14 days from now, or August 1 - 8.

The second chart (below), is a snap shot of the intensity of these factors.  The greatest specific threat showing up as of today is mass violence or terrorism.  However, we will be getting more information in the next few days.﻿